This is home to the rail trail section of the Remutaka Cycle Trail, one of New Zealand’s 22 Great Rides, and a popular biking route for groups and families that follows the old railway line through the Remutakas.

This approved event will require some closures on the forest roads and mountain bike trails used in and around Tunnel Gully, Maymorn and behind Te Marua Lakes.

Tunnel Gully public vehicle access will be closed to the Upper Gums picnic area and Mt Climie carpark during the event. The Tunnel Gully lower picnic area will be open and Tane's Track will also be open for walkers.

At 11.59pm Monday 12 September the traffic light system ended, and wearing a mask is no longer required anywhere in our parks.

Remember to stay home if you are unwell and follow other public health recommendations.

There has been a trail washout on the Remutaka Rail Trail, 8.5km from the Kaitoke end of the trail. Access is still open, but please pass through with care.

This may affect some park activities such as hunting. You will be notified about this if you hold a permit for one of these activities.

For more information on this proposed predator control operation, or others in our region, head to our 1080 operations page.

We are working to eradicate a wallaby population discovered recently in the Kaitoke area. Wallabies cause significant damage to native forests, and this work is being done to protect native species. Possums will also be controlled as part of this work, which will take place from 8 November 2021.

There is a mixture of private land with no public access, and Pākuratahi Forest which contains the Pylon Track which can be publically accessed from Remutaka Pass or Featherston, or through private land at Kaitoke. For more information,  please read our information sheet (PDF 1 MB) .

There are numerous graded mountainbike tracks ranging from beginners to advanced available in the park thanks to the work of our buddies at NtrailZ. Find out about the various options.

Running from Kaitoke to Summit, the Remutaka Cycle Trail links with the DOC-managed Incline down to Cross Creek in the Wairarapa. Enjoy swimming and fishing in the nearby Pākuratahi River and picnic or camp in the pleasant surrounds of Ladle Bend and Summit. Toilets are located at the Kaitoke and Cross Creek entrances, at Summit and at the historic Cross Creek town site.

Find out more at Find Your Wild 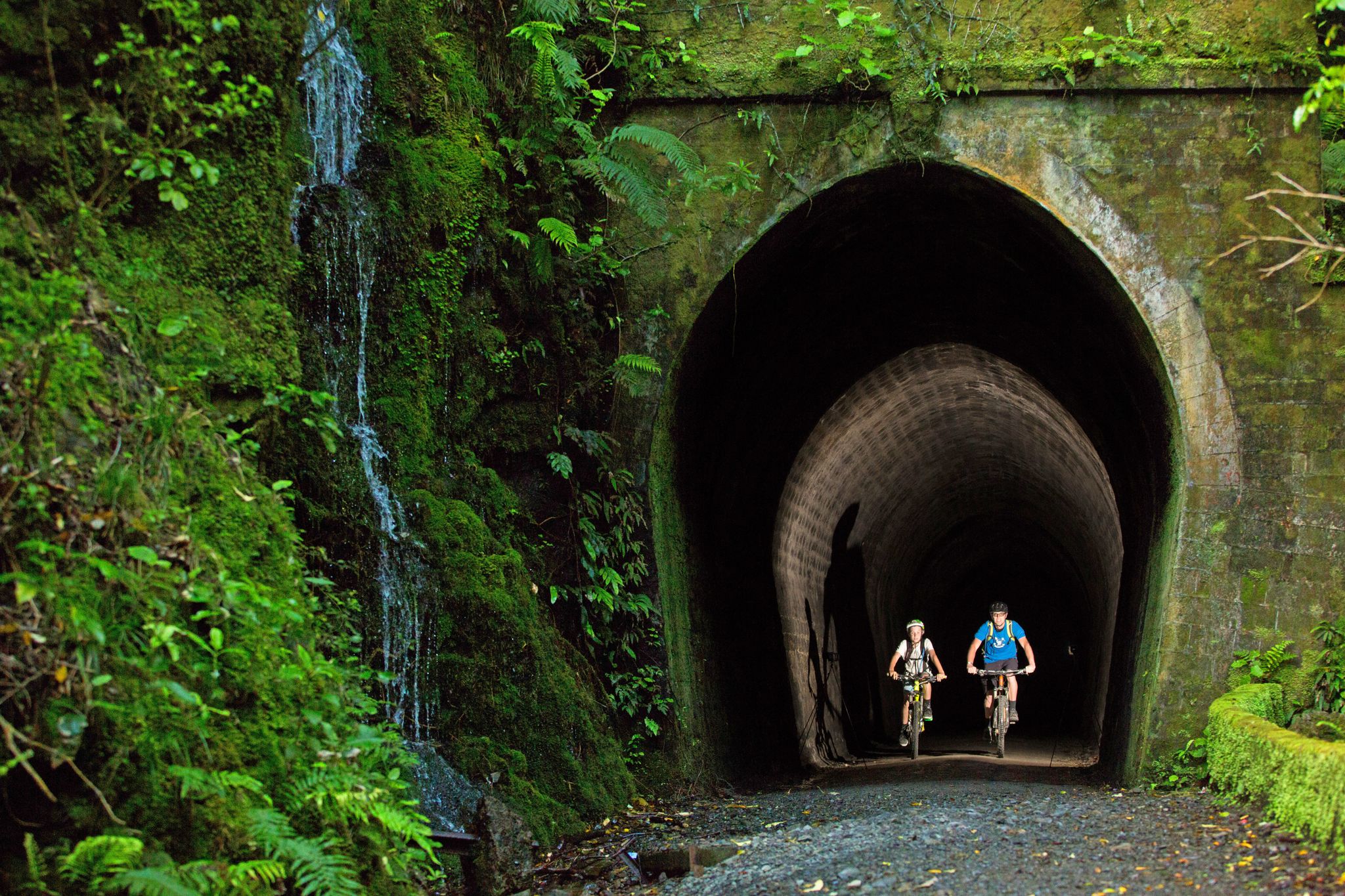 Nestled at the foot of Mount Climie (830 m) north of Upper Hutt, Tunnel Gully Recreation Area is popular for picnics, mountain biking and walking through the remnant native bush. There is plenty of parking, and flush toilets are provided.

Named for its link with the historic Remutaka Railway between Wellington and the Wairarapa, Tunnel Gully features the 253m long Mangaroa Tunnel, built between 1875 and 1877. The tunnel’s working life ended in November 1955 when the new Remutaka Tunnel was opened.  Tunnel Gully is now a popular spot for walking and tramping, mountain biking, and picnicking.

The shallow water of Collins Stream at the Tunnel Gully Recreation Area is ideal for paddling and swimming for young children. Stream water should be boiled before drinking.

Start at the lower picnic area and take the left-hand branch of the track through tall rimu, matai, kahikatea and tawa forest. Cross the road which once formed the old railway line, then climb through hard and black beech forest to Collins Stream and a picturesque waterfall. During the descent to the starting point you cross the Mt Climie access road then pass a grove of eucalyptus trees. This area was once the campsite for workers building the nearby Mangaroa Railway Tunnel, which was completed in 1877.

From the tunnel it is a short walk through podocarp/tawa bush back to the lower picnic area.

This walk is suitable for single mountain buggies.

Start at the top carpark and follow the old railway line formation through native bush and exotic forest plantations towards Kaitoke. There are several forestry tracks leading off this route for more adventurous and experienced riders to explore, including the track to the Remutaka Cycle Trail via Goat Rock (579m).

To reach Kaitoke Regional Park's Te Marua area, turn left where indicated and ride up the hill towards the gate and service road. Cross the road and follow the track through the underpass and down Kaitoke Hill. Return the same way, via the Pylon Loop Track or through Plateau Village.

Enjoy swimming and fishing in the nearby Pākuratahi River.

The shallow water of Collins Stream at the Tunnel Gully Recreation Area is ideal for paddling and swimming for young children. Stream water should be boiled before drinking.

Stretch out your enjoyment of the Remutaka Cycle Trail by camping overnight at the Summit, or the camping area by the Pākuratahi River along from Ladle Bend, just follow the signs. Be careful not to camp under the pine trees. (You can also camp at Cross Creek, but this lies outside the regional park in DOC land.)

Camping is free and you are welcome to bring in your portable gas stove, but there are no fires in the park.

There are good views and hill riding opportunities available on tracks through the pine plantation in the park.

There is a float parking and turning area available off Kaitoke Loop Road. No horse riding is permitted on Tane’s Track or the Mt Climie access road beyond Maymorn fire break track.

Because there are several locked gates along the tracks and to parking areas, you need to pre-arrange a horse-riding permit and keys:

When you have a permit you can collect keys from our Upper Hutt office.

Safety in the forest

Weather conditions can change quickly and much of the area does not have cellphone coverage so please:

Things to keep in mind 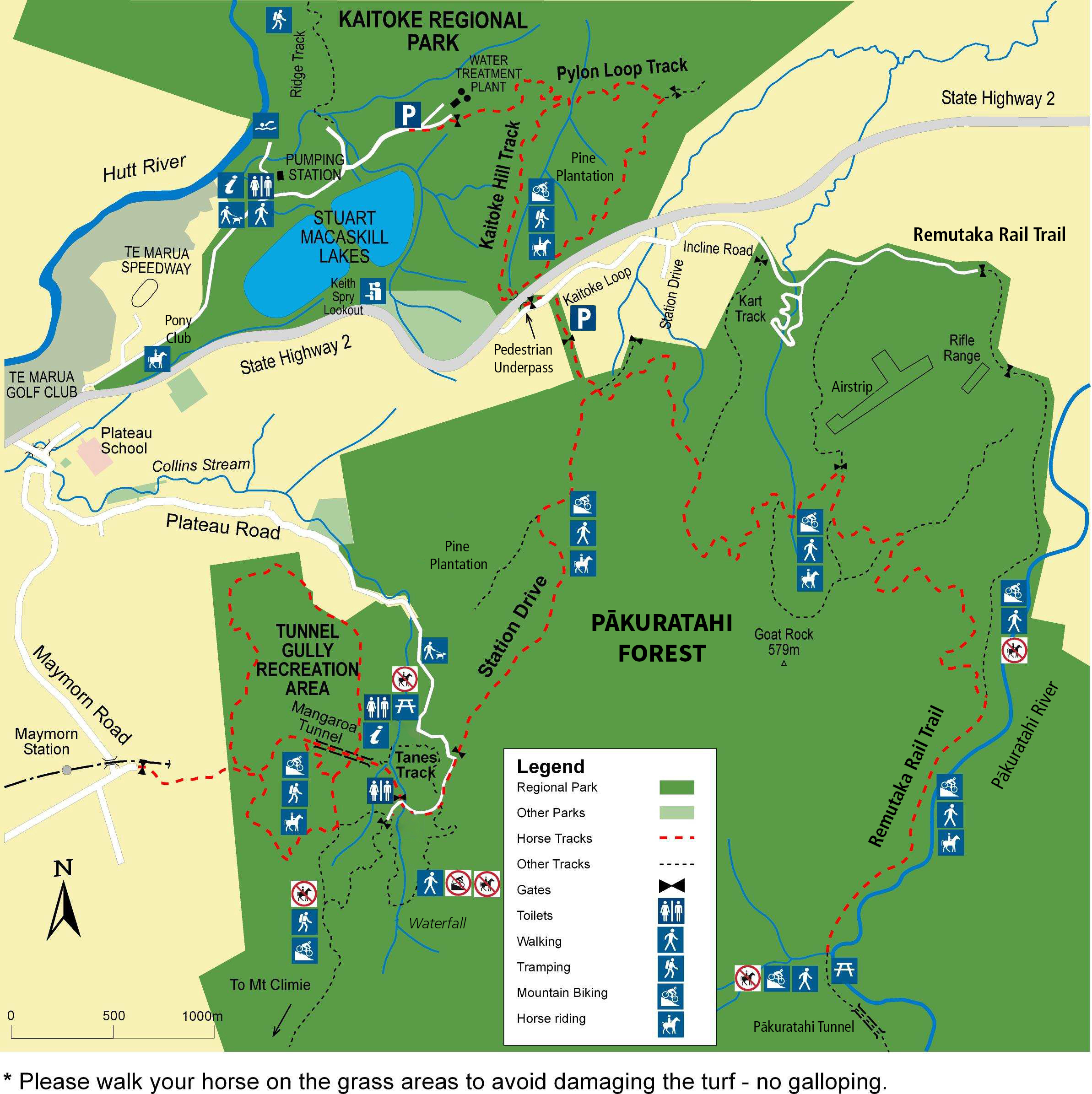 Please contact the ranger at forest.ranger@gw.govt.nz prior to any horse riding events to discuss parking areas and track usage. If you want to use both Pākuratahi and Kaitoke, contact the Upper Hutt office in the first instance.

Tunnel Gully Recreation Area sits at the foot of Mt Climie (830m) in the Pākuratahi Forest north of Upper Hutt. Named for its link with the historic Remutaka Railway between Wellington and the Wairarapa, it features the 221m long Mangaroa Tunnel. Closed to trains in 1955, the tunnel now provides a recreation link between Tunnel Gully and Maymorn.

The historic railway followed what now forms Station Drive, a metalled track joining the link to Kaitoke Regional Park. It also leads to a more challenging access track to the Remutaka Rail Trail via Goat Rock (579m). Please note you will be returning the same way if you ride up this track. There is a float parking and turning area available off Kaitoke Loop behind locked gates.

Kaitoke Regional Park’s Te Marua entrance is dominated by the Stuart Macaskill water storage lakes. There are good views and hill riding opportunities available on tracks through the pine plantation.

Much of the horse riding tracks pass through pine plantation and regenerating native bush. Tunnel Gully itself features mature podocarp/ tawa forest, with hard and black beech found at higher altitudes. The two picnic areas are shaded by stands of eucalyptus trees.

The variety in vegetation offers a habitat for many insects and birds. The bellbird, fantail, tui, kereru and even the occasional North Island kaka are attracted to the rich food source.

Deer, pig and goat can be hunted in parts of the Pākuratahi Forest.

If you want to hunt or go trail riding in one of our parks, you'll need to get a permit. Permits can now only be applied for via our website and are no longer available in paper format or from the Upper Hutt office. Just click on "Apply for hunting permit", set up or log in to your MyGW account, select the permit you want, and your permit will be emailed back to you within minutes.

Please remember that you must have your permit on you at all times within the designated area. To make things easier for you, you can simply take a screenshot of your permit and keep it on your phone. Then you can show the Ranger if you are asked so there is no need to print it out if you don’t want to.

Apply for your hunting (not accessible on Internet Explorer).

In order to manage numbers of deer and keep their numbers at sustainable levels, the NZ Game Animal Council advises that hunters try to shoot two to three hinds for every stag that they shoot, and to target older stags rather than younger ones. Read their full letter for more information and advice. (PDF 260 KB)

So much of the work done in the regional parks wouldn't be possible without the help of people in our communities. If you want to contribute to the care of Pākuratahi Forest, you can join one of our community groups.

Until a large earthquake in 1855, Te Awakairangi (the Hutt River) was navigable by canoe up to Te Marua where Ngāti Ira had their Whakataka pa. From there Māori crossed to the Pākuratahi River flats as they travelled between Te Whanganui a Tara (the Hutt Valley) and Wairarapa via Remutaka Pass.

The colonial government set about establishing road and rail links between the port of Wellington and the fertile plains of the Wairarapa from the mid-1800s. The road, now State Highway 2, followed the Māori route via Remutaka Pass. For the railway, a route up the Pākuratahi Valley was chosen. It had a gentle gradient on the Pākuratahi side of the Remutaka hills, but a sharp 1:15 descent down into the Wairarapa. This is the steepest section of the main line railway ever built in New Zealand. A ‘friction-drive” system of raised rails and engines designed by English engineer John Barraclough Fell was used along it. Six Fell locomotives worked this incline for 77 years (1878-1955). Eventually the high operating costs, slow speeds and the need to replace the hard working Fells led to the building of an 8.8km tunnel under the hills which opened in 1955.

The redundant railway lines were removed but the pathway, bridges and tunnels were left in place. Over time, public use of the historic route grew and by the 1980’s it had become a popular walkway. Formally opened in 1987, the Remutaka Cycle Trail is managed by Greater Wellington from Kaitoke to the summit Yards and by the Department of Conservation on the incline from Summit to Cross Creek.

The forest covers 8,000ha on the western side of the Remutaka ranges north of Upper Hutt.

Did you know Queen Elizabeth II and Prince Philip travelled by rail over the Remutaka Range in 1954? This rail line is now the rail trail section of the Remutaka Cycle Trail, a popular walking and cycling track that includes the old rail tunnels.

The area is best known for its walking, swimming, mountain biking. Take a leisurely walk through Tunnel gully or Tane’s Track. The one hour hike up Te Ara Tirohanga to the northern crest of the Remutaka Range has stunning views, so you will want to bring your camera.

There are two main entrances to the Pākuratahi Forest