This is a great spot for a day out, picnics and camping. It has 500 hectares of rolling paddocks, native bush and forestry, plus an indoor arena for Riding for the Disabled.

Daily from 8am until sunset

Track maintenance will be conducted on the Summit Loop track due to flood damage over the past 12 months. The plan is to re-route the track north of where the Bush Loop leads into Summit Loop track within the native bush section. The track will remain open during construction and we encourage users to take care and follow any construction signs in the park. For further information contact the park ranger at battlehillranger@gw.govt.nz or call 0800 496 734.

Plan your trip into the park to avoid the farm during this period.

This area is closed because young lambs are very vulnerable to stress and need to be left alone so they can bond with their mother. Please do not approach or touch any lambs in the park.

Download a map of the closed trails in the park. (PDF 129 KB)

From Friday 24 September there will be works underway at the Battle Hill underpass (Bridge 7). This is excavation work which means to upgrade our current and future track in this area.

The team will be working seven days a week, 7:30am – 5:30pm to have this work completed as quickly as possible. We anticipate this will take 3 weeks to complete.

During this time public assess through the work area will be maintained, and there will be staff on site to help guide the public through. However bear in mind this is an active work site, and we ask that you please remain patient and follow instruction from onsite personnel. Thank you for understanding.

Daily from 8am until sunset

Battle Hill Farm Forest Park is a great place to introduce children to a farm. There is so much for them to see and do.

The park ranger will introduce the animals and talk to your group for up to an hour. Children usually enjoy a walk around the park afterwards. The centrally located Ken Gray Education Centre is an ideal base for your visit, close to parking and toilet facilities.

Bookings are essential - contact the Park Ranger by email at battlehill.ranger@gw.govt.nz to book your visit.

A trip can be arranged at short notice if the ranger is available. As Battle Hill is a working farm you will need to book your group during the appropriate season if you wish to focus on a specific farming activity such as shearing or lambing.

Educational visits can be held in inclement weather as long as it does not jeopardise the safety of the group or the livestock. Talk to the ranger if in doubt.

We will need to know:

To make sure you have a safe and orderly visit, each group needs to comply with Ministry of Education regulations for student/ teacher ratios. We ask that the teachers and supervisors be directly responsible for the groups.

Please keep your group from unduly distressing the stock animals. The animals are not pets, and most try to avoid human contact (Maisie the sheep being a distinct exception!). Do not chase, try to pick up or ride the animals.

You are welcome to walk and hike throughout the park but keep to the tracks if it's wet.

Tracks for walkers and hikers only

Horse riders or mountain bikers may not use these tracks.

Everyone can use these tracks - walkers, hikers, horse riders, and mountain bikers.

All tracks are shared with horse riders and walkers so keep to the left and watch for others.

With its variety of terrains, good parking and easy access from the road, Battle Hill Farm Forest Park is a great place to ride your horse.

All riding tracks are shared trails with mountain bikes, walkers. A number of pony clubs and other organisations use the park for their horse riding activities.

Things to keep in mind

When conditions are wet, the park may be closed to horse riding.

"If you want a bit more of a camping adventure but you are not quite ready for the full bush experience this is the place. A stream runs through it for the kids to paddle in, there is a flat grassy area to pitch your tent, and proper toilet facilities (not long drop!)"  Tripadvisor

Camping is open 365 days a year and during our winter months (May-November) there is no need to book. During the summer months (December-April) it is usually a good idea to book your campsite as it has become a very popular place; especially on weekends and holidays. Please feel free to contact us for any information about the facilities.

Please contact the Park Ranger to book your campsite

We operate on a first come, first served basis. The limits on camper numbers at Battle Hill is in accordance with the capacity of our septic tank system. 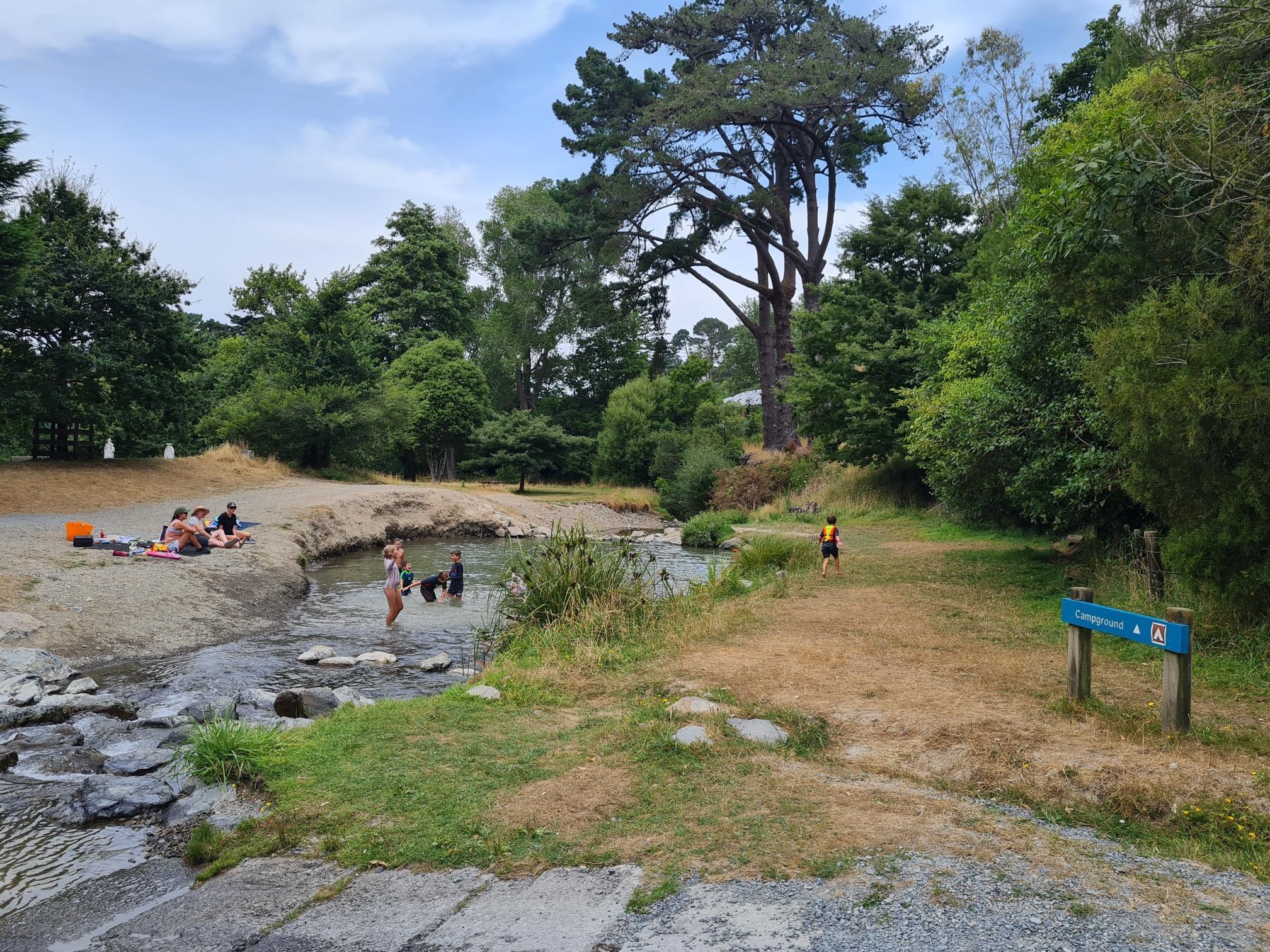 You can also bring your own portable gas BBQ for cooking.

Campervans and caravans are welcome to park anywhere in the designated camping area. We do not recommend crossing the ford to the farthest campsites with long buses or campervans.

There is no dumping station at Battle Hill.

You can stay up to:

Paying for your stay

Please pay via the Pay Machine located at the front of the Homestead Information Centre (first building on your right as you enter the park). It will ask you to enter your vehicle registration, total number of adults, total number of children (aged 5-16), then tap your credit or debit card. No EFTPOS is available. All credit/debit card payments are emailed to the Ranger as a report. The ranger will come by the evening and check all camping fees are paid daily.

As Battle Hill is a working farm, dogs are not permitted in the park.

Alcohol may be consumed responsibly by those over the age of 18. Underage drinking is not permitted in the park. Drunken and disorderly behaviour is not permitted and will result in eviction and trespass from the park. Fines of up to $20,000 apply.

The park opens at 6am and is closed each night at 6pm (1 Apr – 30 Sept) or 8pm (1 Oct – 31 Mar). If you need to leave outside opening hours, please contact the Park Ranger at battlehillranger@gw.govt.nz. We recommend parking outside of the gates if you are joining friends for dinner or will be arriving late back from a bike ride/walk.

Battle Hill is very popular for wedding ceremonies and photographs, and its traditional farm setting helps create unforgettable images of your perfect day.

There is no charge to take wedding photographs in the park. However, we do not reserve sites for non-commercial photography purposes.

Please contact the ranger battlehillranger@gw.govt.nz to reserve particular sites in the park for your wedding ceremony, including the garden around the homestead.

You will need to arrange your wedding reception elsewhere.

So much of the work done in the regional parks wouldn't be possible without the help of people in our communities. If you want to contribute to the care of Battle Hill Farm Forest Park, you can join one of our community groups.

There are lots of good places to fly drones or UAVs (unmanned aerial vehicles) in our parks and reserves, and there are some places where they should not be flown. No matter where you want to fly, you need to be aware of New Zealand Civil Aviation Authority (CAA) rules and fly your drone safely.

Where can I fly my drone in parks?

Drones must not be flown in the following places:

Refer to our  Guidelines for Flying Drones (UAVs) in the regional parks and forests (PDF 155 KB)  for more details.

A permit is not required for recreational flying, but is required if you intend to fly for commercial purposes.

Details of the CAA rules are found on their website.

How Battle Hill got its name

Battle Hill's name is no accident. It acknowledges the site of a historic battle in 1846 between the Government forces and around 250 of Te Rangihaeata's men near the summit.

The history of this area has it all - kidnapping, arrests, canons and warfare.

On 6 August 1846, 250 British troops along with armed militia and police, stood in the freezing rain, ready to attack the 150 men from Te Āti Awa, and 100 men from Ngāti Toa on the hill.

The terrain and native bush made things tricky for the British, they were reluctant to advance and afraid of a counterattack. Instead, they bombarded the pa with mortars (canons).

This went on for days until on 13 August it was discovered that Te Rangihaeata had slipped away under cover of darkness and heavy rain, never to return to his turangawaewae, or place of standing.

In the years leading up to 1846, the relationship between the Crown and Māori was breaking down. The New Zealand Company was trying to buy large parts of land for Pakeha settlers, but the Ngāti Toa iwi, led by Te Rangihaeata, was resisting pressure to sell.

This came after Te Rangihaeata had been involved in killing 22 settlers in a land dispute at Wairau in 1843. Settlers wanted him punished and were looking for signs that he would not continue to disrupt their settlement.

There was a lot of fear from settlers around the conflict and deaths, and that's when Governor Grey launched a two-pronged plan to secure Ngāti Toa land.

The first phase was to kidnap/arrest Te Rauparaha, a war leader of Ngāti Toa, from his pa in Plimmerton, and then the way was clear for the second phase where he launched an attack on Te Rangihaeata and his allies.

Starting in the Hutt Valley, a mixed group of around 500 British troops, police, militia and Te Atiawa allies, joined forces to converge on Te Rangihaeata's at Pauatahanui. They found it deserted and chased him through dense native bush up the Horokiwi Valley to what is now Battle Hill Farm Forest Park.

They were joined by a few hundred Ngāti Toa warriors under the leadership of Rawiri Puaha, but these men turned out to be loyal supporters of Te Rangihaeata, and had been supplying him with ammunition and assistance in his eventual escape.

The loss of a chief

Te Rangihaeata built himself a temporary pa on a hard-to-reach ridge near the summit of Battle Hill. When the Government forces attacked, Te Rangihaeata's men returned fire, killing three Government troops and stopping the attack for a while.

The Government troops sent to Porirua for mortars (canons) and settled into a siege where they bombarded the pa for several days.

By 13 August, Te Rangihaeata had lost nine people and with some of his Ngāti Toa iwi, he fled north to the Horowhenua, never to return to his home.

The Ngāti Toa had lost Te Rangihaeata and Rauparaha and was demoralised and left without leadership. They finally gave in to the Crown's demands for the sale of their land, selling over 608,000 acres in the Wairau and 25,000 acres in Porirua, including what is now Battle Hill Farm Forest Park. In return, Rauparaha was released and they were paid a few thousand pounds.

In 1860, the bush-covered land was sold to the 62-year-old Henry Abbott. He set about clearing the land of bush and stocking it with cattle.

Henry died in 1882 and the farm passed down to his sons Roderick and Nicholas. It remained in the family until 1975.

Greater Wellington purchased the park in 1987.

Henry Abbott, his son Henry and his daughters Maria and Delia, are buried at Battle Hill in a small graveyard, alongside two of the three militiamen killed in the battle in 1846.

Pitch your tent and toast marshmallows over an open campfire. Visit the historic battle site, farm animals and feed the native eels - they love sardines but just watch your fingers! There are trails suited for hooves, feet, bikes and baby buggies, with views of Pāuatahanui inlet and the new Transmission Gully motorway.

The Kapiti end of Paekakariki Hill Road beyond Battle Hill is not suitable for heavy vehicles.