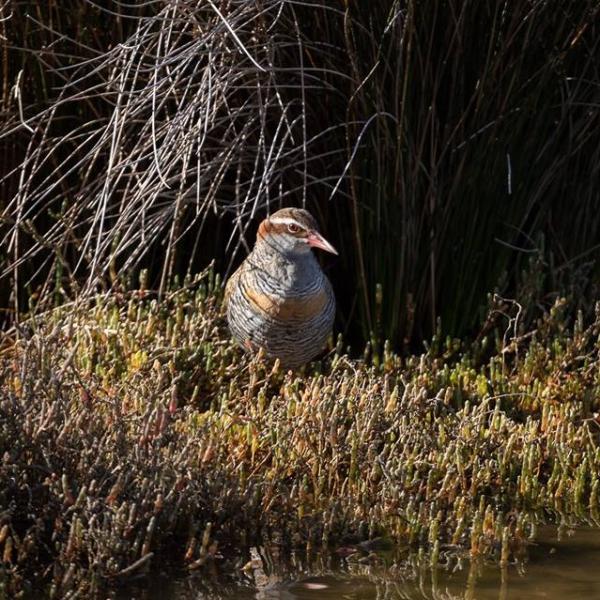 "The banded rail, which is rarely seen in this region, has recently been spotted and joins the elusive spotless crake and fernbird at the inlet. Each of these species is classified as at risk and declining, so we are hopeful they are starting to get a foothold in the region and making a permanent return.

"These and other species used to flourish but have become rare or have disappeared due to the demise of around 90 per cent of the country's wetlands, including those in greater Wellington. Maybe they're coming home," says Roger Uys.

Their return is due to the ongoing work of volunteers, coordinated by Forest and Bird and supported by Greater Wellington, to control pests at Pauatahanui Inlet to create a survivable habitat.

In 2017 fernbirds were released into the Pauatahanui Scientific Wildlife Reserve. Their survival, according to the Department of Conservation, is a potential indicator of the wetlands health because fernbirds only survive in high quality, ecologically diverse habitats with rich food supplies.

"It's a testament to how well the Forest and Bird group and other volunteers have looked after the reserve that fernbird bred successfully last year, with a number of healthy chicks confirmed," says Roger Uys.

Pest trapping has increased around the edges of the Pauatahanui Scientific Wildlife Reserve to protect the spotless crake, the presence of which was confirmed through bird calls in 2016.

Robin Chesterfield of the Pauatahanui Wildlife Reserve Committee says "It's great to see all the hard work of our volunteers is paying off by creating a safe breeding place for these special birds. We've increased the number of times we check and clear our traps over the bird breeding season, which has made a huge difference to the survival of these endangered species."

People interested in helping keep birds safe can join a Predator Free group in their area, and either join the fight to keep special places for native animals clear of predators, or trap them at their homes.